Hi everyone. If you’re celebrating Memorial Day, hope your weather is fine for grilling outside! Five Card Stud released on Tuesday. Special thanks to those who read and commented along the way.

This week I’m moving on to the next series title and sharing a snippet from Trouble in Disguise, Eclipse Heat Book 6. The first time Miracle Beauregard (aka Beau) and Deacon McCallister meet.

Deacon tracked the catcalls and loud insults to a spot in front of the Chester Saloon where a sawed-off cowboy staggered from too much drink and his companions didn’t look much better.

The lanky figure being targeted wore buckskins, leather moccasins laced to his knees, a sheathed knife tied to his thigh, a drooping gunbelt wrapped around his baggy shirt, and a short-barreled shotgun in an attached holster. As if that wasn’t enough protection for ten men, the kid carried a coiled bullwhip looped over his left shoulder, the grip dangling close to his waist.

Deacon snorted at that addition because only an expert whipster could unleash the monster and use it effectively, and that sure as hell wasn’t the half-grown whelp currently wearing it. An undeniable aura of young, dumb, and vulnerable shrouded the figure under siege.

But then the kid caught his lower lip between his  teeth and emitted a shrill whistle, calling a snarling, slavering beast from the alley. At the same time his hand snaked down faster than lightning, retrieved his knife, threw it, and pinned one miscreant to the mercantile wall.

Then, with an almost delicate flick of his wrist, the stripling unfurled the whip, wrapping the end around the neck of the second bully while the third man sprawled on the ground with the wolf growling in his face.

“Ya’ll have a problem?” the kid drawled, surveying seven sets of stunned eyes. 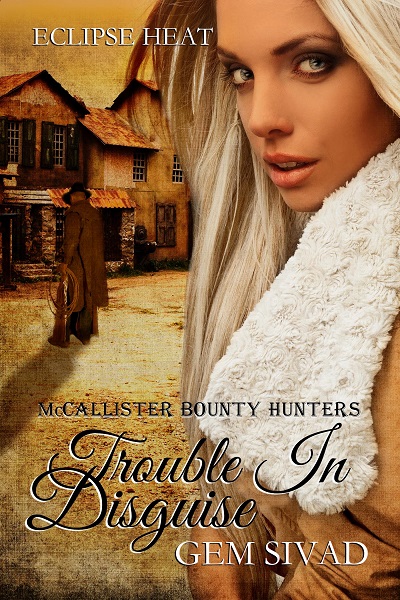 Since both his partners have married and retired from the hunt, Deacon McCallister is alone when he visits the Pleasure Dome, an infamous brothel in Fort Worth’s Hell’s Half Acre. He’s tracking a counterfeiter but what he finds is TROUBLE—dressed in a man’s ruffled shirt and nothing more.

Bounty hunter Miracle Beauregard pretends to be male, calls herself Beau and for years has fooled the general public concerning her gender. But underneath Miri’s disguise, beats a feminine heart in lust for Deacon McCallister. Though she spends a lot of time dreaming about her rival, she never expects to act upon her longings.

When Miri follows an outlaw to the fanciest whorehouse in Texas and crosses paths with her heart’s desire, she trades her buckskins for bare skin to play the part of Deacon’s paid companion. But, she’s wrong when she thinks her one time with Deacon will be enough. After she leaves her bounty hunter rival behind, she discovers he’s so enthralled by his one night lover, he’s on the hunt to find her again—and he’s got forever on his mind.