Hello everyone. I’ve been working in the 19th century for the past year, and decided it was time to re-emerge. Wow, it’s 2021. I hope you are all filled with new ideas and a fresh page to write them on. Having said that, I’m sharing a snippet from a boys-to-men historical adventure I’ve been working in. No title yet. 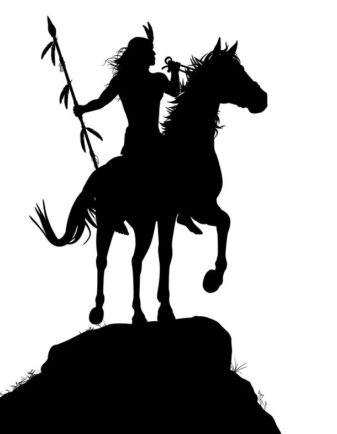 Charlie Wolf took great satisfaction in leaving no evidence of his visits when he slipped on-and-off the ranch. It was late afternoon, almost dusk, when he skulked around the horse corral, using the shadows to reach the first outbuilding. Once inside, he climbed to the loft and crawled higher into the cupola. From his vantage point, he viewed the house through the louvered slats covering the high, glassless window.

When the lamps across the ranch yard had all been extinguished for the night, Charlie traded his barn perch for the ranch porch, using the water barrel at the corner of the building to boost himself onto the roof.

He listened, waiting until he heard the devil’s snores cutting through the otherwise silent house before moving again. His goal was the open, second-story window—the raised sash a signal the old man would never recognize as anything more than an attempt to cool the room.

Seeing the silent welcome they’d devised in the past gave Charlie an unexpected jolt of pleasure. Aside from his mother, the two boys who lived in the house were the only white people Charlie called friends. He eased inside and faced Rob, who stood tensely, staring at the window.

“I’m glad you came tonight but it’s not a good time to get caught. The old man‘s on a rant.” Rob whispered.

“Jonas went for his whip and Sam holed up in the attic.”

“I’ll get him. You take the porch route down and be ready with horses.” Charlie eased back outside.

“Take this, he’ll need it.” Rob thrust a canteen at him as Charlie crawled up the slanted roof and stopped at the attic window which wasn’t much more than a skylight.

It didn’t seem big enough for him to get through. He squinted trying to see into the darkness. If it was as hot inside the third story room as it had been in the barn cupola, the younger McCallister might have passed out by now.

Cautiously, Charlie scratched on the window, replicating the sound a stray branch might make against a pane of glass. A cover blanketing the window came down and a candle replaced the darkness as Sam stared out at him. When Charlie motioned him to open the window, Sam shook his head and pointed at the sash, mouthing the words, “Nailed shut.”

Hatred surged through Charlie. He took out his knife, wishing he could visit the beast snoring below and slit his throat. Instead, he slid the point of the blade between the soft wood of the frame and the window sash, patiently working each nail loose until Sam could get his fingers beneath to help pull it open.

A blast of heat escaping the airless room struck Charlie’s face when they finally pushed the glass to the top. Sweat glistened on Sam and he used his shirt to wipe it off.

“Water.” Charlie pushed the canteen into his cousin’s hands. In spite of the cut on Sam’s mouth and the bruise on his forehead, it appeared he’d escaped one of Jonas’s severe beatings.

The younger boy wet his face and lips before taking a long drink. Then he grinned at Charlie and drawled, “Bout time someone came to play.”

Thanks for stopping by. Happy New Year!

Hi, everyone.I hope your first month in our new year has gone well. I’ve spent mine in 1887 Texas, working on Nell Carter and Juda Kincaid’s story. It began as a short Christmas piece meant for the holidays. But, when I traveled back in time to Eclipse, suddenly all the locals started popping in to say hello and update their stories as well. An Eclipse Christmas has evolved and grown. I’m not ready to turn it loose yet, but until then, I’m sharing a diary entry from the Journal of Lucy Quince, the first book in the Eclipse Heat series.

February 14, 1867. Dear Diary, I am cutting and pasting a wonderful surprise for Ambrose. I’m making him a Valentine’s Card. We are still not speaking and I have decided upon a course of action—I will seduce my husband. 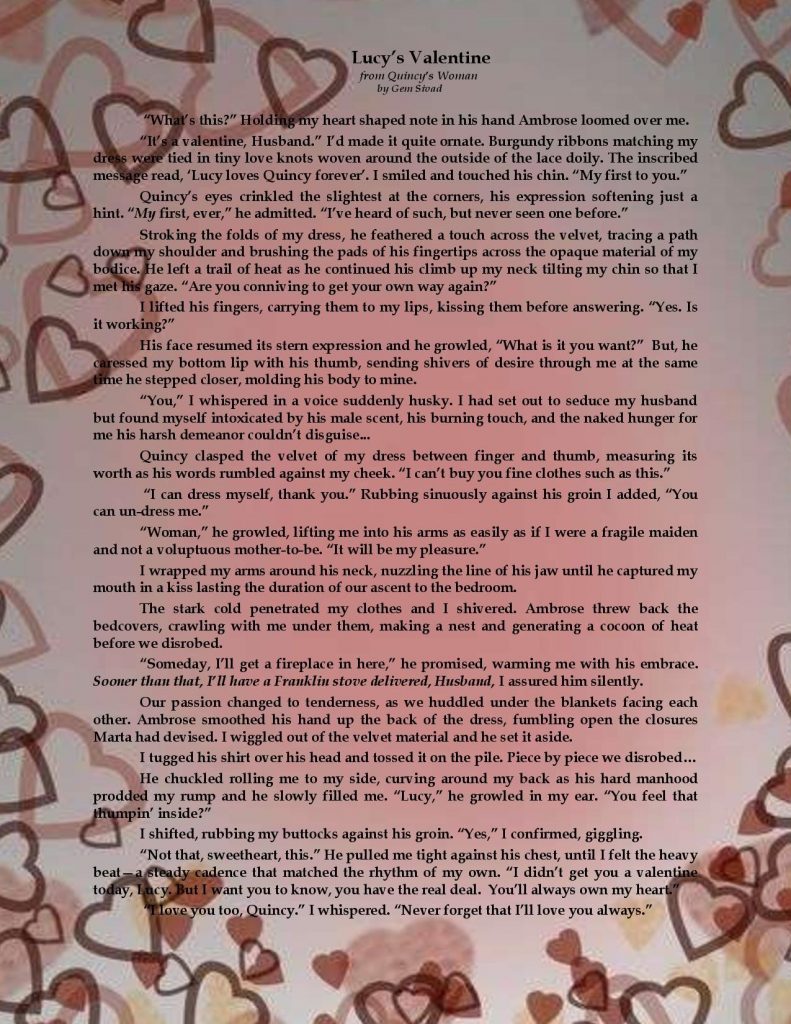 For three days, Quincy and I remained estranged until the housekeeper said, “You best get that man back in your bed. I like to have the morning’s to myself while I fix breakfast, and having him snoring on the couch gets my day started off wrong.”

“How?” I muttered miserably. Ambrose came in late, left early, and avoided my company.

Mrs. Carmichael suggested a course of action that had eluded me. I, a woman heavy with child, would enthrall my husband with desire. It was so silly and incongruous it made me laugh—and then comply.

We pillaged my closet looking for dresses that could be let out and redesigned. I had no sewing skills and hers were limited. But, as she noted, anything would look better than the chenille robe I had fallen into wearing around the house night and day. When we’d inspected the barn, I had changed in order to go outside. Nothing had fit and I’d had to leave the back of my dress undone and wear a heavy shawl to cover the exposed underclothing. Since then, my depression had left me wandering in a disheveled and untidy state indifferent to even dressing.

My spirits rose as we pillaged the closet and chose any outfit from my wardrobe that seemed worth redesigning. “Not very practical, these things,” Marta opined around the pins in her mouth.

“But oh so pretty,” I countered, stroking the soft burgundy velvet of the gown I stood in.  In my physical wretchedness, I had forgotten how wonderful it felt to look elegant. When Mrs. Carmichael began ripping seams apart, I cringed, hating the deconstruction of one of my favorite winter gowns.

But when she loosed the sides and raised the waist recreating it into an empire style, I began to have hope.

“We need an insert here,” she frowned at the material pulled taut over my burgeoning breasts.

We both looked at the pile of dresses on the bed and spied the grayish pink gossamer silk at the same time. I watched eagerly as she cut into the fabric, not caring this time at all, with the promise of a beautiful costume before me.

Many tiny stitches later, I stood in front of the rosewood vanity and admired the outcome.

“You can’t stand there drooling over yourself all day, Missy,” Mrs. Carmichael reminded me. “You need to take a nice long bath, splash in some of that smell-pretty you use, and present yourself tonight looking fine.” END_OF_DOCUMENT_TOKEN_TO_BE_REPLACED